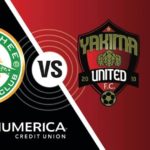 The game had all the trappings of a ‘clasico’, with plenty of goals as well as plenty of physical play, which led to a pile of yellow cards, but no ejections.

The game, played on Mother’s Day, and under a persistent wind, started with Yakima and Wenatchee betting on two different styles of play. While Yakima relied on the long pass upfield to its forwards, the Capitals relied on the short touch and the quick feet of its midfielders.

The dissimilar approaches yielded no results until the 30th minute, when a run along the right flank by newly-crowned Washington State Adult Player of the Year Eleazar Galvan allowed Edwin Tinoco to stretch the Yakima defense as a decoy. That left Yonatan Rodriguez alone in front of Yakima’s goalie Jacob  Rhodes. Rodriguez served up Galvan’s assist with a soft touch past the diving Rhodes for the 1-0.

The teams went into the break with that score. Yakima had a goal called back right before the halftime whistle due to a handball. Four minutes into the second half, Hernan Mendoza left things 2-0.

In the 64th minute, Galvan –the league’s top scorer last year—had his first tally of 2016, and in the 80th minute, Tinoco left matters 4-0 with a masterful free kick. It was Tinoco’s second tally of the season for Wenatchee.

The game looked as if it would end in a shutout rout for Wenatchee, but Yakima punched back with two goals in four minutes. Pineda scored in the 84th minute and Al Valencia scored in the 88th minute. A minute later, Yakima had another chance at goal but the yellow-clad defense got the ball out  right before it crossed the goal line. In injury time, Wenatchee’s leading preseason scorer Adan Martinez put the game away for good for the Capitals with his second goal of the regular season.

The referee issued eight yellow cards in the game, six of them for the Capitals. The win improves Wenatchee’s record to 1-1-0 and drops Yakima’s record to 0-1-1. The Capitals sit tied for third place with Olympic Force, while Yakima sits tied for next-to-last with the two-time defending champs Spokane Shadow. 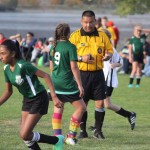 WENATCHEE, WA— Wenatchee Football Club is providing opportunities for local players to take their game to the next level. Now the club is helping do the same thing for soccer referees in the Wenatchee Valley.

WFC will field a reserves squad for their Evergreen Premier League side. The Reserves will play matches that will give local referees experience in calling matches. EPLWA matches and Reserves matches will all be played at the Apple Bowl.

“Our Reserves will play friendlies at every EPLWA home game before our first team,” says WFC General Manager Javier Reyna. “We plan for local referees to officiate those games. Then have them stay and watch the first team match referees (who come from around the state) to learn from them.”

Ed Navarro of the Wenatchee Valley Soccer Referee Association is excited about the opportunity.

“Our main goal is to expose our local referee members to a more competitive soccer. Working with Wenatchee FC gives us that opportunity,” says Navarro, who is the Director of Instruction and Assignor for the WVSRA.

“What we hope to accomplish is have more referees upgrade so they can do semi-pro games locally, or wherever they need good referees.” 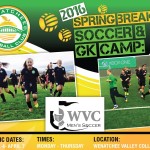 Wenatchee FC in partnership with the WVC Men’s Soccer present to you the 2016 Spring Break Soccer & GK Camp. 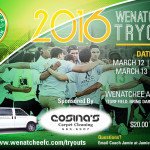 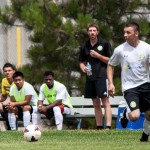 WENATCHEE, WA—Wenatchee FC of the Evergreen Premier League (EPLWA) is excited to announce that Jamie Richards has been secured as the new head coach of the club for the 2016 season. Further, the Capitals have tabbed Dr. Luke Astell as an assistant coach and Director of Fitness.

“Jamie’s overall soccer experience, passion and previous knowledge about Wenatchee FC made him the best choice for our new head coach,” says WFC General Manager Javier Reyna. “Since he was an assistant with us last year he will be able to continue the program built by Cesar Ceppi.” Ceppi, a native of Brazil, coached the Capitals in 2015.

Richards coached Chelan High School to the 2013 boys soccer state title. He’s also been an assistant in the Wenatchee Valley CC soccer program. “It is an honor to be a part of this program and I am looking forward to an exciting season!” Richards says of his new post.

He also believes being on the WFC sidelines last year is a big advantage for the season to come. “Many things were observed being the assistant coach for Wenatchee FC last year. I know the players very well, as I have been a part of coaching some of them as youth and in high school, even playing with them as young adults. Putting  them in appropriate rolls will be key.”

Capitals supporters are likely curious about the look and style of this year’s team. “That will depend on the players we are given,” says Richards. “I like diversity and being able to adjust by the seat of your pants. Defensive structure is key to a great foundation. Midfield and forward is where the individual creativity will decipher the attack we will use.” Richards does express an overall mantra about how he leads a soccer club.  “Passion, persistence, discipline, work ethic, and perfecting the simplest!  We all, meaning the coaching staff, administration, and players need to expect the most out of each other!”

Wenatchee FC is also happy to announce Luke Astell will be on the sidelines again this year as an assistant to Coach Richards and as Director of Fitness. Astell is co-owner of Mount Stuart Physical Therapy and Balance Point Health Fitness in Leavenworth, Washington. “I was introduced to soccer as a PT with an interest in sports performance. I was asked to look at  movement and address injuries for the local high school team and for my daughter’s team,” says Astell. “Last year was my first year with Wenatchee FC and I look forward to returning this year and working with the team and coach Jamie Richards.” 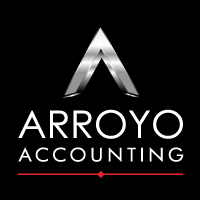